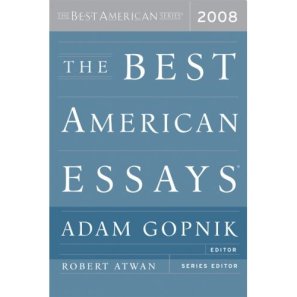 My essay, “Eleven Ways to Consider Air,” winner of the Willard R. Espy Award and the Pushcart Prize, has been listed as a “Notable Essay” in the Best American Essays 2008, guest edited by Adam Gopnik. The essay first appeared in Ecotone and will be anthologized in the forthcoming Borne on Air: Essays by Idaho Writers as well as the Pushcart Prize anthology.

This is my second “Notable Essay” in the BAE series. I also had a Notable in last year’s volume which was guest edited by the late great David Foster Wallace.